When I walked into my local Apple store, frustrated and downtrodden from PC issues, I thought I was going to get a hug.

I’ve been a PC guy for my whole life.   Like many people, I am a stick-in-the-mud creature of habit.  I like to know what’s coming, what to expect, and that I will wake up to a life of accurate expectation every morning.

I, like millions of people out there, have stuck with windows for years, simply because I know it, and with all of it’s quirks, failings, reboots, blue-screens, bugs, security issues, and unreliability, I at least know that it is expected, and that every two years or so, I’ll have to go through the cost and motions of replacing my machine. 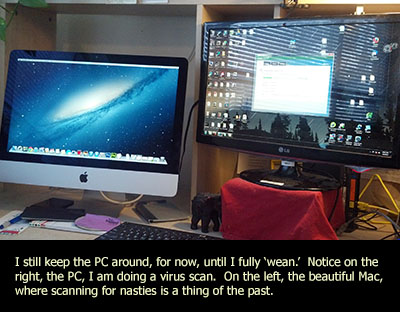 However, I recently started questioning all of this nonsense.   After all, Microsoft has been around since the dawn of digital time, so gee-whiz – shouldn’t things be better?  Why is it that a brand-new windows computer will start progressively slowing down as soon as you drive it off the lot, as it were.  Why is it that I can’t trust that something weird won’t be inserted deep within my operating system, thus compromising my security, just by visiting a website?    Why is it that a windows desktop machine is still as big and noisy as a 10 pound baby?

Almost every year, we make the trip to visit my parents during the holidays.  For the past 4 years, my dad has had the same Apple Desktop, and each year, I ask him how he likes it.  His response each time, in a creamy, almost post-massage-type voice is “I loooove it.”  I then prod him as to whether he’s ever experienced a virus, slowdown, crash, or issue and he always comes back with a “nope, never” canned reply.

I then stared asking other folks I know that run with a Mac, and always, without fail, I get the gushy “I love it” reply, as it to say that a Mac owner and his or her machine should be granted the right to marry, or to perhaps get a room for the night.   Never have I heard someone say they hate it, put up with it, or wished they could somehow summon the courage to finally switch to PC.

I’ve never heard a PC person use the word “love” when describing their machine.

So, I stared making trips to the Mac store at the mall to ask questions.  I knew going into it that there would be some hurdles to a transfer.   Most notably, there will most certainly be programs that I have spent money for on a PC that won’t transfer to a Mac, and that I will have to re-purchase.  That’s simply a given.

I asked several blue-shirted employees about security.  One of the most challenging things I was told that I would need to get my head around it that you don’t ever ‘scan’ your computer for nasties.  It just isn’t necessary.   You simply have to trust it.    Anyone I asked there admitted that Apples aren’t immune to attacks, but it is a rare, national-newsworthy event when it happens.

Andrew (I noticed that half the employees there were named Andrew) said that if my machine ever acts weird or slows down, just to bring it in and one of their ‘geniuses’ would make sure it’s ok.

Which, to me, is another huge selling point.  I have somewhere to go – a physical location close by where I can ask questions, not feel pressured, and get support by true geeks who love what they do, and who are panting to help people achieve Mac-nirvana.

After a thorough cross-examination of Apple with the wonderful blue-shirt brigade, I bought a Mac Desktop, which, right out of the box is elegant and simple. There is only a screen, and one cord to deal with. Everything else is blue-toothed and wireless.

An employee suggested that if I wanted, they could set it up right there at the store, and walk me through the initial prompts, questions and setup – which, was extremely easy and intuitive.   It’s nice, though, to have someone standing there in case a question came up.   We got my gorgeous machine calibrated and humming, and a small swarm of employees helped to box everything back up to send me on my way.

Once I got home, I knew there would be more hurdles and question marks, but overall this was far less than I expected.   Most of the major programs I used on my PC have a Mac counterpart.   The Mountain Lion OS is supremely intuitive, and most everything I needed I found quickly.   There’s a ‘finder’ which is the equivalent to windows explorer.  There’s a ‘Launchpad’ that neatly displays all of your programs, and a nice, neat toolbar down below that lists all of your major access points to the computer.

My most significant difficulty with the switch was simply one of muscle memory, and learning the slight differences on where things are, and how to access them.   The mouse is different, and it is, by default, not geared for a right-click.   This can be set up easily though.   The keyboard that came with the machine is slightly smaller than a standard keyboard, so there were quite a few misspellings and backspacings in the first week of use.   However, after about 7 days, my brain had figured it out, and I am now back to composing as I was a few weeks ago.   Mac Mail is slick, but is slightly different.  Mailboxes are separated, and like-emails are displayed together.   I did have some difficulty transferring all of my email from Thunderbird to Mac.  There are a few good tutorials out there on this if you google it.

If you were to ask me, today, what I think of my new machine, I would be pretty creamy about it.  Love is in the air.

I don’t want to become a PC hater, I really don’t.  I have actually kept my old one around, since, as I knew going into it, the transition will take some time – perhaps a year.   I am not ready to plunk down $700 to re-purchase Photoshop, so when I need it, I turn on the PC, and while it is booting up, go have some coffee, and then stumble through as I have for the past 15 years or so.

It is a bummer switching, however briefly.   I have quickly become so used to a hiccup-free, secure, slick working environment, that I even feel slightly sorry my windows counterparts.

Maybe Windows 9 will bridge the gap.   By then, though, I think I will have completely and successfully weaned, and it won’t much matter any more.

6 thoughts on “PC to Mac: My Delightful Journey”

Assisted Living with PC to Mac: My Delightful Journey