We have all heard of Alzheimer’s dementia (memory and previously acquired skills are lost including loss of speech),  for years and I am almost certain that more than one of you has dealt with a dementia type in an intimate manner at some point in your life, either through a loved one or a close friend.

Surely, you have witnessed the devastation it can wreak not only in one’s life but that of an entire family. With the number of people living with Alzheimer’s dementia presently on the rise here in the USA many of us are frightened about our future with this disease. 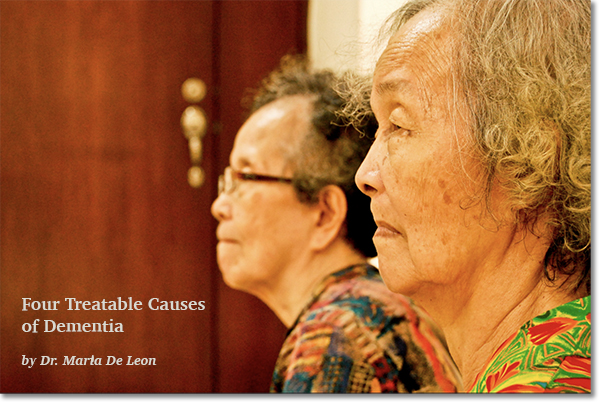 Although, Alzheimer’s disease is by far the most common type of dementia affecting nearly 4.5 million individuals, this still remains a diagnosis of exclusion.

There are several other types of dementias which are not as well known to the public that can actually be treated if caught early. Therefore, we must be aware of them since Alzheimer’s dementia has no cure at present; although with early diagnosis and early treatment initiation, the individual’s quality of life can be significantly improved for a longer period of time.

Keeping above in mind, it is then extremely important to seek medical attention at onset of memory loss because it is believed that approximately 9% of patients presenting with dementia symptoms actually have a reversible condition.

The 4 most common causes which can mimic dementia in an individual are metabolic disturbances, vitamin deficiencies, medication related, and increased fluid in the brain.

Many of the medications we take especially as we get older can cause similar symptoms to dementia. One of the biggest culprits is long term use of benzodiazepines otherwise known as anti-anxiety medications or sleep aids like Valium, Xanax, and Klonopin. Another class of medications is the antihistamines used for various causes like colds, bladder incontinence, sleep, and allergies. Pain medications can also cause confusion, poor concentration, and forgetfulness.

So always first thing to evaluate is the list of medications, which you should always take in full to your physician including over the counter medications (OTC) along with any natural supplements. Even OTC and natural remedies can cause confusion and disorientation by either interfere with other medications or cause themselves the cognitive problems.

People with B12 deficiency also may experience

It is estimated by researchers that the general population suffers from B12 deficiency anywhere from 1.5% to 15%. This is especially more common as we age since we cannot absorb dietary b12 as well and also as we experience chronic illnesses such as Parkinson’s disease, there tends to be a higher number of individuals with this type of deficiency.

This is tested via a blood test. Normal levels range from 200-900 pg/mL (picograms per milliliter). However, in neurology anything below 400’s should be treated because it can cause many of the above symptoms. The way to replace is with increasing rich b12 diet like consumption of red meat, eggs, and dark green vegetables. But will also require B12 injections into the muscle at least once a month or b12 nasal spray or sublingual (under the tongue) to allow for absorption.

Wernicke-Korsakoff Syndrome: is a degenerative brain disease caused by vitamin B1 (thiamine) deficiency. Symptoms include memory loss, vision problems, poor concentration, disorientation, and key is prominent confabulation (unintentionally making up stories to fill in memory gaps). The causes of this type of dementia is usually alcoholism, anorexia, severe weight loss or malnutrition, chronic infections, untreated AIDS, and kidney dialysis. Treatment is B1 replacement 300mg a day. May need IV treatment initially- but must be diagnosed early otherwise once entire spectrum present will only prevent from worsening but not reverse already present symptoms.

As an aside Vitamin D deficiency also plays a role in memory loss by increasing risk of developing Alzheimer’s.

Other common symptoms of thyroid disease are:

A simple blood test can reveal this problem which is completely reversible with replacement of thyroid hormone.

Fluid in the brain as a cause of dementia:

NPH- Normal Pressure Hydrocephalus: is a less commonly known type of dementia yet common enough to be considered because complete reversible when caught and treated early. This occurs commonly in people in their 60’s and 70’s. The name is an oxymoron because although there is buildup of fluid in the brain when measure, the pressure is normal. This is because it displaces brain to allow for build -up of fluid. As the fluid increases in the fluid space cavities of the brain it begins to exert pressure on nearby brain structures causing memory loss, problems with bladder, affecting balance, clear thinking, as well as reasoning leading to personality changes and behavioral problems. This is also a mimicker of Parkinsonism because the areas commonly affected in Parkinson’s (PD) sit near the fluid spaces so any impinging on these there will, be similar manifestations of PD- like symptoms such as rest tremors and gait impediments.

Next time you or a loved one notice a memory problem especially if have any of the above symptoms, seek the attention of a health –professional to make sure you are not dealing with a possible treatable and reversible cause of cognitive changes.

Is It Alzheimer’s disease or Vitamin B12 Deficiency? Discover the Difference and Learn the Warning Signs