I don’t think it is any secret that I live in Broomfield, which is tucked neatly in between Denver and Boulder. It’s a smaller town population-wise, but it covers a hugely expansive area (it is in a county of the same name – Broomfield County).

There is a Sunrise Assisted Living facility on the edge of Broomfield, that I actually always thought was a part of neighboring Superior, CO. I learned, however, that it is indeed within the city limits of Broomfield, right on the line though between the two towns.

This particular assisted living facility – The Stratford at Flatirons – is a beautiful building. I think it is a relatively new facility, but I drive by it often and admire how elegant it looks. Apparently, the inside is pretty snazzy too!

I am learning a new technique of photography, called “HDR” photography – or, “High Dynamic Range” photography, which essentially takes 3 to 5 photos of the subject, right in a row, at different exposure levels. Then, if you have the software to do it, you can “stack” these photos together, or blend them into one, giving the photo very deep and vibrant colors, and excellent sharpness and contrast.

I took a weekend recently, and went over to The Stratford at Flatirons assisted living facility and took several HDR photos of the exterior. Unfortunately, it was sort of a cloudy day, but there is one that I thought turned out pretty well, so I have posted it here.  There are a number of other facilities in the Broomfield area that I plan on practicing on as well in the coming months – I’ll try to choose a sunny day for those!

So here it is: The Stratford at Flatirons in HDR: 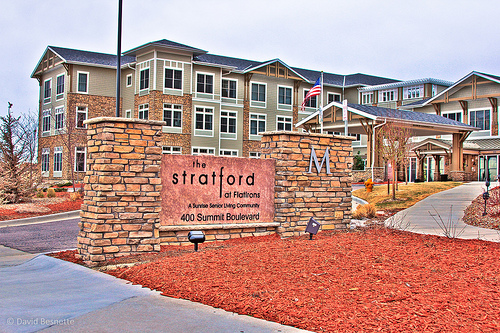 3 thoughts on “Sunrise Assisted Living in Broomfield – A Facility Photo in HDR!”