More than two thousand years ago Plato wrote that “music gives a soul to the universe, wings to the mind, flight to the imagination, and life to everything.”

My home is constantly filled with music thanks to my daughter being incredibly gifted musically. But before this, my love and appreciation for music was fostered by my grandfather. Subsequently forging a bond between us that would last his entire life.

However, my family is not the only one whose life has been enriched by music. 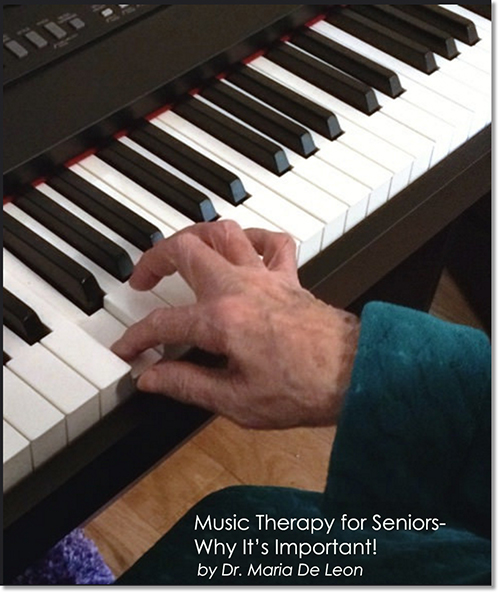 Many people especially as they age hold on to music as a life line. Over the years, music ‘therapy’ has granted people sitting silently in a corner of a hospital ward or facility apparently absent from body and mind a second chance on life. It is the single most powerful force in the universe due to the release of potent chemicals in the brain such as dopamine capable of stirring one’s soul.  The simple act of listening can transport us to days of old evoking vivid memories.

Therefore, many have found that the use of music as a form of therapy is one way to improve cognition but also to reach those who are already cognitively impaired.

The Older Americans Act of 1992 defined music therapy as “the use of musical or rhythmic interventions specifically selected by a music therapist to accomplish the restoration, maintenance, or improvement of social or emotional functioning, mental processing, or physical health of an older individual.”

This is because hearing a favorite tune can produce a calming effect and change our mood in a heartbeat even revert those who have Alzheimer’s and cognitive to a temporally normal state as they listen and sing their favorite songs.

One of the most famous and well known examples of this is a video that went viral not long ago about an older man named ‘Henry’ who had been ‘unresponsive and stooped over’ for some time experiences an awakening when he listens to music with a pair of headphones.

Music therapy can be extremely beneficial for both caregivers and elderly especially for those who suffer with chronic illnesses.

One of the most beneficial aspects of having music therapy in your facilities is a significant improvement in cognitive skills:

Music can help seniors process their thoughts and maintain memories. For those who suffer dementia, music from their childhood or young adult years has proven efficacious in obtaining a positive response even when the person can no longer communicate. Furthermore, it has the added benefit of uniting and bringing emotional intimacy when spouses and other family members share in the creative music experiences.

It is no wonder we are all drawn to music because it ‘expresses our feelings when words fail us.’

The key is finding the music that speaks to the heart. Talk to the assisted living facility members individually and in group to discover what type of music resonates with them. Ask about their favorite artists or musicians from their past.

For instance, one of my favorite pieces of music is “Mambo Italiano,” because you can’t help but move to the music putting you in a happy mood automatically. Slowly, begin introducing music into their daily routines. Soon you will notice increased alertness, improved speech, increased social skills, decreased stress as well as a decreased need for narcotics which itself will improve cognition. All of these in conjunction will lead to an increased physical activities.