I have had too many friends and relatives who have passed away and many more who are still living to let this opportunity of discussing breast cancer go by.

Furthermore because not only is October Breast Awareness Month, but also the first of the month is Love an Elder Day. 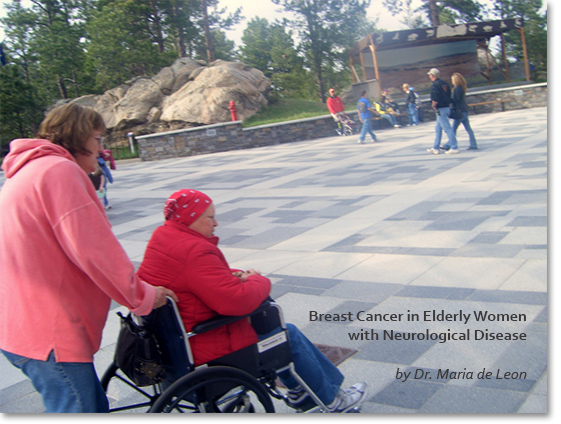 What best way to show love to the women we love by educating them and making them and us aware of the many challenges faced by someone who has both breast cancer and neurological disease.

The reason both types of disease are important to consider is because:

Dealing with breast cancer and a chronic neurological disease like PD or Alzheimer’s disease can certainly be overwhelming dealing with one disease alone now two can pose one of the biggest challenges to overcome. The problems can be exponentially worse if there is significant memory loss, or depression which can be part of many neurological diseases as I have discussed previously.

Plus nearly ½ of patients with Parkinson’s are said to develop dementia after 10 years. Having dementia can have a great impact on the diagnosis and prognosis of breast cancer as well.

This is because once a woman is cognitively impaired or has another underlying chronic disease the breast cancer might not even be treated because of the possible deleterious effects of undergoing treatment. As was opted for my grandmother who suffered from moderate PD and found to have a malignant brain tumor. The ensuing seizures were enough to significantly worsen her underlying disease. So she was kept in home hospice with comfort care.

When a woman or her family decide on surgery as treatment whether lumpectomy or mastectomy in the presence of cognitive impairment or neurological illness have been shown to suffer from greater debilitating side effects which tend to last longer than those without neurological deficits.

Even when the confusion and fogginess brought on by surgery or chemo in a neuro patient is temporary, the ordeal can be frustrating and extremely intrusive on one’s life to say the least.

Those with advance cognitive problems in fact have severe cognitive decline after general surgery which is irreversible. This could account for the reason women with breast cancer who also have advance Alzheimer’s, dementia or other cognitive problems usually do not fare well.

However, it is important to note that having neurological conditions like PD actually has been shown to increase risk of breast cancer over all in women but particularly if they carry a gene commonly expressed in PD known as the LLRK2 (leucine rich repeat kinase 2) gene.

On the other hand a commonly used medicine in the treatment of certain types of breast cancer called Tamoxifen can actually interfere with the efficacy of commonly used seizure medications. The Tamoxifen can be made less effective even completely ineffective if used with Dilantin (phenytoin).

Of note, the gene BRCA1 which is commonly associated in breast cancer of many women can increase the risk of developing Alzheimer’s in those carrying gene. The odds are greater in this group of women given that 1/85 people are expected to develop Alzheimer’s.

So staying informed, knowing your risks for Breast cancer which are

Assisted Living can support those who have been diagnosed, or suffer from Parkinson’s, Cancer, Alzheimer’s or Stroke.

Photo by B. Gordon