Let me start by saying that I am finding it very difficult to believe that an 800+ bed university hospital doesn’t have a free, or affordable shuttle or transportation service to get seniors back home after their stay.  More on that in a moment… 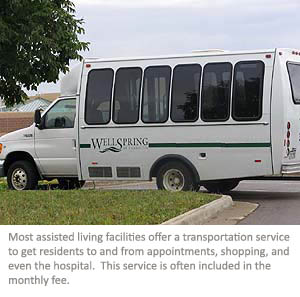 My wife and I are at the point in our lives that we expect..or rather are not surprised when we receive urgent phonecalls from her aging mother that she has had a new health issue come up, or a fall, or worse.    It’s an emotional, and unfortunate fact of life for anyone who has aging parent(s).

We received just one of those calls this weekend from my mother-in-law that she had fallen, and was in the hospital.

To give a little back history – my mother-in-law is in her 80’s, and has had a pretty tough year.  She has ‘successfully’ beaten cancer (as far as we know) – however, the chemo that she received has created a whole new set of health issues, and we believe that she is not receiving the absolute best care possible, and we also believe that she is now a good candidate for help – whether that be in the form of a visiting caregiver or social worker a few times a week, or perhaps even a more permanent living environment such as assisted living.   Our mother-in-law, however, is pretty strong-willed and stubborn, and won’t easily accept any alternative other than ‘doing it herself’ and living at home- alone.

The phonecall came in over the weekend as my wife and I were sitting at dinner. We didn’t hear the phone ring, so it went to voicemail.  It was from our mother-in-law, and she was in the hospital.   She had fallen in her house as she was fiddling with the dishwasher, and had hurt herself (how, we weren’t sure as of this point).

The issues that she has been facing as a result her yearlong battle with cancer are extreme weakness, swelling, and fatigue, which will obviously make her prone to falls and injury.  Apparently, chemo cause a whole slew of issues, including the ones that she is starting to face, that can appear at any time down the road after treatment.   Her doctors have put her on medication that my wife and I have learned are “heavy duty” and should only be used in life-threatening situations.  Her meds can cause even more gristly side-effects and issues, of which eventual death or permanent disability are not out of the realm of possibility.

Naturally, we are extremely concerned and worried  (we love her dearly, and she is such an important part of our family) – but since we live on the other side of the country, for us to get answers, or to offer any help can prove to be extremely challenging.    Our mother-in-law also doesn’t like to give us the ‘full story’ when it comes to her health issues.  She believes that by acknowledging her ailments, she gives them ‘more power,’ which, can obviously backfire when people are trying to help her, but don’t know what to specifically help her with.

Moving To A Larger Hospital

We received another message that “mom” was being moved from her small-town hospital to a large, university hospital, about an hour from where she lives.    We learned that she needed testing, scans, and observation that her local hospital could not provide.   She was transported via ambulance.

Fortunately, after a stay of a few days, and after many tests, rest, and observation, nothing serious was found (other than her current, existing issues).    The hospital staff informed her that she was do be discharged the next day, and that she needed to arrange for a ride home.

A ride home? Seriously?  A hospital of this size doesn’t have a shuttle service, especially for the frail, and/or elderly to get them home?   Actually, they do, but only for within the city limits, and doesn’t include the many outlying suburbs and towns.

Even then, I can’t believe that they don’t have a shuttle or ride system set up to help people get home – even if there is a fee to do so.   I would personally be happy to pay for her shuttle just to make sure she gets home safely.

I was in such disbelief that this hospital had never had this situation happen before, and that they didn’t have a free or affordable system or protocol to handle it that I had to e-mail the hospital to ask them myself.

My message to them was “Do you have a shuttle, or transportation system to get elderly patients home after they have been discharged, and if so, what is the cost?  My mother-in-law lives about 30 miles outside of town.”

I will post their reply when/if I get one.

As of this writing, my mother-in-law is waiting at the hospital, trying to figure out a ride home that won’t break her bank, or ours.   We have offered a few suggestions that she has stubbornly turned down, which is frustrating.   My wife has a friend in the area, very close to the hospital,  who has offered to take her at the end of the day. However, our dear, wonderful, but stubborn mother-in-law doesn’t want to burden her.   So, here again, we are stuck trying to figure out a solution.

How does a family convince one of it’s elderly members that he or she needs to be in an assisted living environment?    This is the question that our family is facing, and unfortunately, we have not arrived at an answer to this yet.    We are in no position to ‘force’ mom to go into assisted living, so we are hoping that, if these current health issues don’t resolve, or if they get worse, that mom will realize that she is jeopardizing her health and well-being, and also putting a great deal of strain and stress on her extended family.

We’ve already looked into the assisted living scene in her area, and we have learned that there are many excellent choices, and that some of her friends are already living in facilities in her area, and are leading successful, active, and happy lives there.

Almost all assisted living homes or facilities offer some sort of a transportation service that is usually included with the monthly cost.   I often see very snazzy vans or minivans that belong to various facilities around town taking their seniors shopping, or to medical appointments, and I am sure, at times, they are bringing their residents home from the hospital.    To me, having that peace-of-mind knowing that mom always has a ride – especially at a point in her life that she is still insisting on driving, even when we all know that it is becoming unsafe for her to do so, and unsafe for the other drivers on the road.

The peace-of-mind that comes from having a parent in assisted living is furthered by knowing that there will (or should be) always a ‘watchful eye” on mom in case there is another fall, or urgent health issue.    Had mom not been near her phone, or if the fall was much worse, she could have remained in her house for days, on the floor, without being discovered.

For now, we are left with hoping that her health takes a turn for the better – which is the one way that her stubborn-nature may actually serve her well.

Update from my wife:

I was on the phone with Mom most of the morning.  The social worker today finally found her a ride home through Transport U http://www.transportu.net/.  It is free the first time but they can’t come for another 3 hours.  So, that is a relief.