Unless someone has had experience with epilepsy and seizures, it might be surprising to learn that the CDC reports 1 in 10 people will have a seizure in their lifetime. Or that Epilepsy is the third most common neurological disorder behind Alzheimer’s Disease and Stroke. Or that Epilepsy affects more than 65 million people worldwide, 3 million of those in the United States. Or even that over half of a million people age 65 or older in the United States have epilepsy. 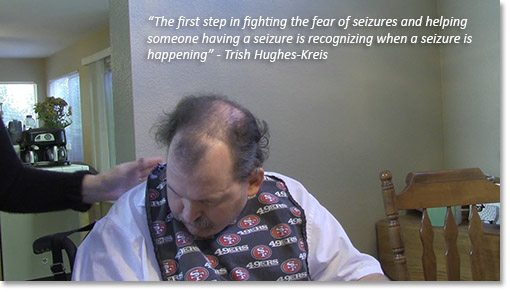 For those who do not have experience with epilepsy or have never witnessed a seizure it can be scary. Epilepsy can strike at any time and at any age – can you imagine going through your whole life and then, suddenly, start having seizures during your retirement years? Or seeing your parent start to have seizures while they are at home or in an Assisted Living Facility?  The same fear grips parents witnessing their child’s first seizure.  This can be a scary experience for the person having seizures as well as anyone witnessing them because there are a lot of unknowns when a person first has seizures.

It is not uncommon for healthcare professionals to even be fearful of seizures if they have not had experience with them in the past.

As with anything, education and experience help dispel myths and fear and make the “unknown” more comfortable and manageable.

My brother has had epilepsy his entire life. Unfortunately, he fits into the 30% of people who do not have good seizure control (even after trying numerous medications, surgeries and medical devices). Seizures are still scary for me and I have been exposed to them for 49 years! I can just imagine (and actually see the fear) in people who are witnessing a seizure for the first time.

Seizures are basically out of control electrical activity in the brain. Seizures also can have three stages to them: an “aura” (beginning of the seizure); the “ictus” or the actual seizure and then the “postictal” which is the period after the seizure.

The first step in fighting the fear of seizures and helping someone having a seizure is recognizing when a seizure is happening. Not all seizures look alike and not all are as they are portrayed in the movies. There are over 40 different kinds of seizures!

Let’s get acquainted with a few of the different seizures a person may have or witness:

While an epilepsy diagnosis is usually given after a person has two, otherwise unexplained seizures it is possible to witness a seizure without knowing if a person has been diagnosed with epilepsy or not. Understanding seizures helps dispel myths about the disorder and will help those with epilepsy live without fear of embarrassment and ridicule and will encourage empathy and kindness.

Unfortunately, stigma and myths about epilepsy persists to this day. Knowledge and awareness about seizures and epilepsy will combat this stigma and dispel the myths and promote acceptance and compassion toward those with epilepsy.

Robert has given me permission to share a clip of him having a seizure. Robert’s seizures are the Complex Partial type and we both hope this helps allay any fears if you see someone having one in person.

Recognizing seizures is the first step in knowing how to help when a person is having one. Part 2 of this series gives tips on first aid for seizures.

Tagged on: Epilepsy
By David
Contributors

Assisted Living with Epilepsy and Seizures: Fighting the Fear and Unknown (Part 1)