Assisted Living Directory has a No Spam Guarantee!

Summary: Dr. De Leon dispels the myth that bullying is a behavior that is usually inherent with our younger population. Unfortunately, bullying is much a reality in older social groups. Dr. De Leon talks about the reasons for elder, or senior bullying, and what can be done to stop elder bulling, whether it takes place in a structured care environment, such as assisted living, or in other social situations.

Dr. De Leon is a contributor for Assisted Living Directory

When we think of bullying, we usually conjure-up images from the movie “Mean Girls,” teenagers and youngsters picking on the frail, disabled or socially awkward. Unfortunately, bullying does not stop with puberty. 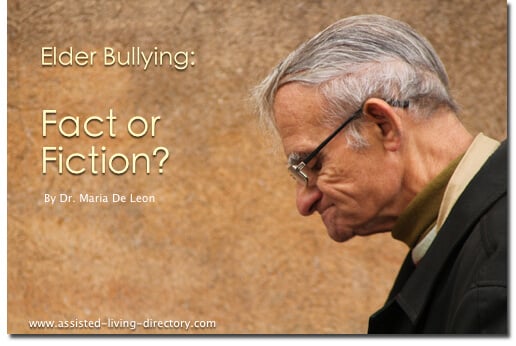 Bullying is much a reality in older social groups as it is of young ones.

This problem known as bullying is defined as “distinctive pattern of deliberately harming and humiliating others,” and it occurs to about 10 to 20 percent of seniors, although little information is available on the subject.

The negative feelings associated with this type of behavior are the same only difference is the people involved and the location. Among grey haired individuals, the bullying usually occurs in the form of verbal abuse. Both genders can be participants of bullying among senior citizens although the styles are somewhat different.

Women tend to use more passive aggressive behavior like gossiping, excluding someone, murmuring behind someone’s back, talking about their hair etc. While the men tend to be more outwardly aggressive making more forward insulting remarks towards those they don’t like which can take the form of name calling and in extreme cases actual physical assault.

Unfortunately, neurological disease in the elderly population can be one of the causes and/ or contributing factors for some of this aggressive behavior towards others. For instance patients with Alzheimer’s dementia can perceive normal actions, even from people they know, as threatening which can sometimes escalate to violence.

Other reasons seniors might become bullies is fear of the unknown, while other times is as simple as having a history of bad personality. Just because someone ages does not necessarily mean they will suddenly become “Mr. or Mrs. Nice GUY!” Face it, if someone is mean and ornery as an adult they will be mean and nasty as an elder person. After all, personality only gets more defined as we age. So picking on someone who is perceived as “inferior” is not necessarily a disease of the aging population but rather can be the pathology of an individual independent of age.

According to a gerontology expert of social work from Arizona State University, Robin Bonifas, “this behavior is more common in institutions such as nursing homes, assisted living where people are forced to not only spend a lot of time together in close proximity but also have to share limited resources such as sofas, games, TV and particularly staff attention.”

Believe it or not even among the gray haired, clicks can exist! These clicks not unlike those in high school can prey on the weak-more disease and chronically ill. But occasionally, as I said before, is the mentally ill who do most of the bullying.

So how do you stop bullying?

As in any other situation – the best way to halt this behavior is intervention. Identify the cause and who is doing the bullying and provide intervention. If you see someone getting picked on either verbally or physically or you yourself feel like a victim -speak out!

Because effects can be long lasting, I encourage everyone to watch for these types of behaviors –

Repetitive negative behavior directed towards another individual usually – a singled out person.

Having someone make belittling jokes about one particular individual all the time.

Let someone know what is going on! Talk to the staff.

Also be aware that because sometimes people are in pain or irritable due to their illness does not necessarily mean they are bulling. So get to know the people in your facility and recognize when there is a change.

If suddenly a nice old lady begins to snap then most likely there is an underlying reason and needs to be investigated. So don’t just snap back or retreat and be offended, offer help, or seek counsel from a person in authority that can look in to the matter. Behavior should not be ignored or it can escalate.

Many times, I myself have been suddenly confronted with what appeared aggressive behavior by elderly people who were either patients or friends and of course the first human instinct is to get upset and react; but I have come to discover that if you make a mental note to step back and think about the person who is being the ‘aggressor’ most times you will find that the sudden out of character behavior was a way of asking for help. Most times is due to pain or cognitive decline like onset of dementia.

Taking time to understand the person or situation contributing to this one individual to suddenly become a bully is one coping mechanism we can all put into practice. Another coping mechanism, we can employ when being bullied is looking at the bully square in the eyes, and stating your position to the aggressor in a non aggressive or hostile manner.

Finally, you can simply ignore the behavior- walk away and this will diminish the power of the one verbally bullying. The staff in the community should set clear guidelines for dealing with bullies such as provide frequent meetings to discuss possible problems among its members. They should set and reinforce the expected rules- “do unto others as you would have them do unto you!”

Finally, I advice the staff in these facilities to implement ways to minimize bully power such as ‘no reserved seating’ in an area where there is limited resources and bound to be conflict.

Responses to this article: